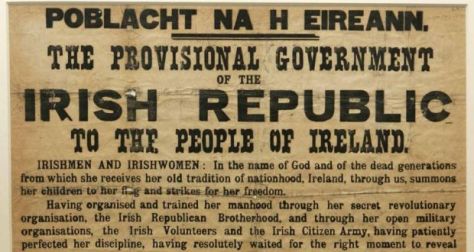 How Ireland Made Her Case Clear

“The period from 1914 to 1918 is an important one in the struggle for Irish freedom.  It was a transition period.  It saw a wholesome & necessary departure from the ideas and methods which had been held & adopted for a generation, and it is a period which is misread by a great many of our people, even by some who helped that departure, and who helped to win the success we have achieved.

“The real importance of the Rising of 1916 did not  become apparent until 1918.  It is not correct to say now that the assertion of the republican principle which was stated by the leaders of the Rising was upheld as the national policy without a break.  The declaration of a Republic was really in advance of national thought, and it was only after a period of two years’ propaganda that we were actually able to get solidarity on the idea.

“The European War, which began in 1914, is now generally recognised to have been a war between two rival empires…Germany spoke frankly of her need for expansion, and for new fields of enterprise for her surplus population.  England, who likes to fight under a high-sounding title, got her opportunity in the invasion of Belgium.  She was entering the war ‘in defence of the freedom of small nationalities.‘

“America at first looked on, but she accepted the motive in good faith, and she ultimately joined in … ‘Shall,’ asked President Wilson, ‘the military power of any nation … be suffered to determine the fortunes of peoples over whom they have no right to rule except the right of force?‘

“But the most flagrant instance of the violation of this principle did not seem to strike … President Wilson, and he led the American nation – peopled so largely by Irish men & women who had fled from British oppression – into the battle and to the side of that nation which for hundreds of years had determined the fortunes of the Irish people against their wish, and had ruled them, and was still ruling them, by no other right than the right of force.

“There were created by the Allied Powers half-a-dozen new Republics as a demonstration of adherence to these principles.  At the same time, England’s military subjection of Ireland continued.  And Ireland was a nation with claims as strong as, or stronger than, those of the other small nations.

“This subjugation constituted a mockery of those principles, yet the expression of them before the world as principles for which great nations were willing to pour out their  blood and treasure gave us the opportunity to raise again our flag of freedom and to call the attention of the world to the denial of our claim.

“We were not pro-German during the war any more than we were pro-Bulgarian, pro-Turk, or anti-French.  We were anti-British, pursuing our age-long policy against the common enemy.  Not only was this our policy, but it was the policy that any weak nation would have pursued in the same circumstances…

“Our position was our old position.  Our aim was our old aim.  Our intention was simply to secure liberation from the English occupation …

“The Rising expressed our right to freedom.  It expressed our determination to have the same liberty of choice in regard to our own destinies as was conceded to Poland or Czecho-Slovakia, or any other of the nations that were emerging as a result of the new doctrines being preached…

“Our claim was to govern ourselves … It was a gesture to the world that there could be no confusion about. It was an emphasis of our separate nationhood and a declaration that our ultimate goal was and would continue to be complete independence...

“We were to learn that freedom was to be secured by traveling along a different road … that it was [the English] presence alone which denied it to us, and we must make that presence uncomfortable for them, and that the only question between us and them was the terms on which they would clear out and cease their interference with us.”

“ The Path to Freedom”
by Michael Collins
http://www.goodreads.com/book/show/157332.A_Path_to_Freedom