The peace negotiations, and the Treaty which they produced, are the events which led directly to Michael Collins’ death.

“All the streams – economic, political, spiritual, cultural and militant, – met together in the struggle of 1916 – 1921, which has ended in a peace in which the Treaty of Limerick is wiped out by the departure of the British armed forces, and the establishment of an Irish Army in its place … The Union is wiped out by the establishment of a free native parliament, which will be erected on a Constitution expressing the will of the Irish people … With the termination of the Union goes national enslavement if we will it. Complete national freedom is ours and nobody but ourselves can prevent us achieving it.”

“Let us not waste our energies brooding over the more we might have got.  Let us look upon what it is we have got.”

“The Assassination of Michael Collins:
What Happened At Béal na mBláth?”
by S M Sigerson 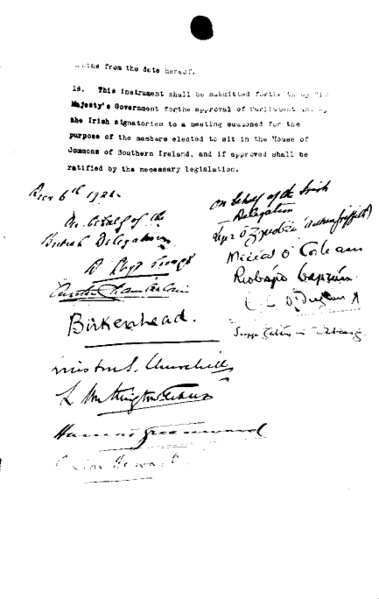