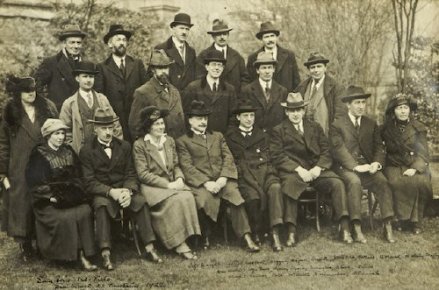 Meeting for the Collins-DeValera Pact, 20 May 1922, Mansion House, Dublin

The Collins-DeValera Pact was one major effort to resolve the situation
without violent conflict: it began in May 1922.

Some excerpts from the book on this subject:

“In the subsequent months, painstaking efforts were made to restore
unity. The Dáil, the IRB, and Army representatives met continually,
striving to find some means to proceed without armed conflict…
Many strove desperately to find some means of going forward
without civil conflict. Indeed, there is an awesome sense of tragedy,
in reviewing the transcripts of these debates: to hear echo again the
penetrating observations, poignant pleas, passionate oaths, of the
greatest hearts and minds of that heroic era; many of whom would
soon be silenced forever. Silenced by the outcome of their own
relentless march: into the disaster which they all knew that this
war would bring…

Ultimately all these efforts culminated in the Collins-DeValera Pact.
This stipulated that new elections be immediately held: candidates
for the Dáil would stand as either pro- or anti-Treaty, and a national
referendum would decide on whether or not to accept the Treaty.
No matter which side proved more numerous, pro- and anti-Treaty
representatives would cooperate together in a coalition government.
(This would be the Third Dáil.)“

( ** also known as the Tan War or the Anglo-Irish War)

“The Assassination of Michael Collins:
What Happened At Béal na mBláth?”
by S M Sigerson 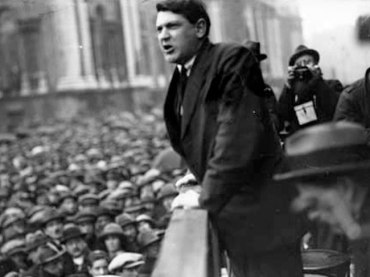 An alternate future that we missed.

At every election, people in Ireland confront the possibilities, ideals, disillusionment, and hopes, inspired by the national situation.

Election season can also be a volatile time, as repeatedly demonstrated, throughout the world. It seems some will do anything to try to sway the outcome.  Indeed, political killings seem to hover around election years.

Who profits from political murders?  What kind of government, what kind of society has proceeded from them?  Is it too painful, too fearful, to consider precisely what we’ve lost by assassins’ bullets? What we were left with in its place? Or how lasting the damage has proved?

Compare Michael Collins with our leaders today: How have they handled Ireland’s problems and potential? What would Michael have done?

Consider what Ireland might have been, if Collins had survived as did many of his contemporaries. If he, a younger man, more vigorous and fit, had remained as active and prominent in public life, as long as DeValera did? Consider if it had been Collins who presided over numerous governments, reigned as Taoiseach and/or President, continually from 1922 through the 1970s.

Michael Collins had a comprehensive, far-reaching vision for Ireland’s future.  His own writings about plans for socio-economic justice, agriculture, public arts, the revival of Gaelic language and culture, comprise an important chapter in “The Assassination of Michael Collins: What Happened at Béal na mBláth?”

The Assassination of Michael Collins:
What Happened at Béal na mBláth?
by S M Sigerson 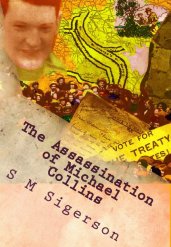